During the Schunck family meeting in 2015 in the Glass Palace, the fact has been remembered that it is 80 years old. Marie-José Houben, granddaughter of the founder Peter Schunck, told the story following below.
Leo Dohmen, a grandson of Peter Schunck and son of Christine Dohmen-Schunck made some additions to her text. They are hereunder incorporated.

What happened before
More Glaspaleis

Schunck∗, in the heart of the coal basin

The situation in the centre of Heerlen, with the locations of Schunck after 1874, the Glass Palace after 1935 and the St. Pancratius church

Click on the pictures to see them in their original size!

At their favorite place, at the bay window of the penthouse on the Glass Palace, 1953

I am Marie-José Houben, granddaughter of Peter and Christine Schunck and daughter of Nolda Schunck.

Elsewhere at this site you will find more about the past:
The weaving mill Schunck in Kettenis.
24-08-1874 Arnold and Anna Schunck-Küppers start up in Heerlen. 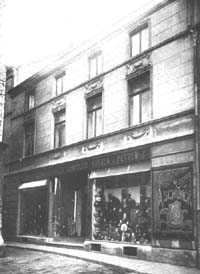 Despite the crisis in the thirties, the sales at the Kerkplein (church square) continued to rise and the store was too small. In addition, the local government insisted on a new building. They were annoyed about the “Vuile Hoekje” (Dirty corner), a plot of land next to the Marktplein (Market Square) which was owned by Schunck. After in 1932 a hoarding had been blown, the municipality came with an ultimatum. “Build, or the plot will be expropriated”. Schunck decided to build: decently big and high. My grandfather had a covered market place with plenty of natural light in mind. Together with architect Peutz, his daughter Christine Dohmen-Schunck and the city manager Van de Ven of Heerlen, he visited department stores in Europe and discovered what they were looking for in Nantes. Here in 1932 the department store Les Grand Magasins Decré had been opened. This Art Deco building would be the model for architect Frits Peutz. In 1943 Decré was destroyed in a bombing raid.

But, as I said, it was crisis time. In connection with a problem in the mining industry, secretary of state Verschuur attended Heerlen, and spoke the historic words: “Only a madman can set op such a building in a depression like this. It’s a risky plan.”

For the construction of a number of problems had to be solved.

The building was revolutionary for that time. All the more the stacked market was, where the floors were not only accessible via a monumental staircase, but also with elevators. It was also except for the Pancratius church the tallest building in Heerlen.
Note A.Schunck: The most revolutionary of it was probably the skeleton of the building with its hanging glass facades, in addition to the associated natural ventilation system. This system of glass facades, suspended from each floor, was previously used only for skyscrapers. That’s why it was also called a five-story skyscraper. 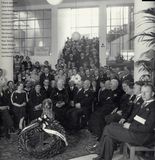 1935 Opening of the Glass Palace

The Garden of the Penthouse

The penthouse on the Glass Palace was called “The Roof Garden” as a whole.
With the youngest daughters, Nolda (2nd row, center) and Carla (2nd row, right).
The boy between Peter and Christine Schunck-Cloot is their eldest grandchild Otto.
Is the woman left their longtime housekeeper Maria?

In the penthouse, mostly called “Roof Garden”, where my grandparents lived, it was envisaged that on the 6th floor almost every child would have his/her own bedroom. From the circular bay window you could look down on the market.

The Glass Palace after the bombing raid on January 1, 1945

This image shows the result of the bombing raid on 1 January 1945. My mother (of Marie-José Houben) told that the glass was three feet high in front of the door. Due to its central location, on the Glass Palace the siren was installed that warned the population of Heerlen during the war in case of danger. Grandma and Grandpa sheltered then with their children and children-in-law in the 2nd basement until the alarm was over. Grandson Peter Schunck told us that they have been watching on the roof with the whole family when Aachen burned at the end of the war. As sign of her gratitude that the Glass Palace has survived the war relatively unscathed, Christine Dohmen-Schunck donated a statuette of the holy Virgin by the sculptor Charles Vos, which adorns the St.Pancratius church, above the entrance from Pancratius square.

In September 1949 the company Schunck was 75 years old. This was celebrated with the employees on a large scale. The invitation shows the increase of the staff over the years. (Pictures of the invitation 1949 will come)

From the pit the coal and from Schunck the clothes

The text of this advertisement is in the local dialect of Heerlen and also with the image of the miner it addressed the target audience.

Business was good. So a branch was opened in 1954 at the Rijksweg-South in Geleen and Schunck could take over the business of Wassen in Amsterdam, Rotterdam and The Hague after that. This was mainly due to the bloom of the coal mining

Because Schunck managed well to respond to the needs of the miners, they could acquire property around the Glass Palace. In the company N.V. A.Schunck all children received an equal number of shares.

1962: Takeover of NV Wassen (formerly NV Kleedingbedrijven Wassen) with stores in Amsterdam, The Hague and Rotterdam by the N.V. A.Schunck.
Purpose: to achieve better purchasing options. Also in this context was the 1963 accession to the Coöperatieve Manufacturen Handelsvereniging De Faam G.A. in Amsterdam. The acquisition was not a success, because Schunck and Wassen did not serve the same market segment. From 1964 Wassen ran at a loss and on April 15, 1969 it was sold to NV Vinke.

Photo: Clothing company of Wassen in The Hague, 1956
Source: haagsebedrijventoen.nl

Peter Schunck died in 1960. It was decided that Christine Dohmen-Schunck and her family can move into the “Roof Garden”.

Leo Dohmen writes: “A plan comes up, to expand the Glass Palace to the south (former Emmaplein, now Pancratiusplein) by another glass palace. The then Mayor Van Rooy did not approve and the municipality of Heerlen developed the so-called Squares Plan. This plan set free the church of almost all real estate that Schunck owned, except the Glass Palace. In return, a piece of land at the Honigmanstraat / Dautzenbergstraat / Promenade was offered, where another attractive department store was built of four floors with basement and escalators.”

In 1964, the business activities were transfered to the Promenade. Unfortunately Frans Dohmen died suddenly in 1966. The business incl. subsidiaries then employed 600 employees. Ms. Dohmen took over her husband’s duties, in addition to the existing daily management and the education of her six children.

In 1965, Joop den Uyl, Minister for Economic Affairs, announces the closure of all coal mines in the Netherlands.
At that time, the management still consisted of Peter’s son Leo Schunck, his daughter Christine Schunck-Dohmen as well as her husband Frans Dohmen (deputy and responsible for human resources). The business Schunck was right then in a downward spiral in terms of sales. For the shareholders, a difficult-to-digest development that reached its peak in the spring of 1972. The siblings Leo Schunck and Christine Dohmen-Schunck as the management of at that time, felt forced to raise capital to buy out shareholders and to continue the operation of the company. Of course Schunck was a possible prey for the competitors (Vroom & Dreesmann). The media managed to hype this vigorously, but behind the scenes Christine Dohmen-Schunck had her plan. With the help of the highly motivated employees and the moral support of the customers, she was able to acquire the required credit. A commission of three wise men was the deciding factor for a go-around, in which the cheaper line of the house (Markthal) was left to Leo Schunck. The “Wassen” businesses were sold. From then Ms. Dohmen-Schunck was supported by her nephew Louis Verleisdonk as a deputy, who was in charge of economic planning.

During this period, the investment bank demands that the Glass Palace is sold, to keep the company, now called Schunck BV, in operation. The asking price, which is initially not accepted by the city of Heerlen is, is paid by the Heerlen entrepreneur Bep Groenendijk. He redesigns the steel framework of the glass façade and the transparant Glass Palace loses its charm and its function. It is rented to small traders and to authorities (VOR and ABP)

The “Roof Garden” then is still the apartment of the family Dohmen-Schunck, until in 1976 Ms. Dohmen-Schunck, at the age of 69, leaves the Glass Palace as the last Schunck descendant.

In the 90s, demolition threatened, after the building had been empty for a couple of years. Junkies and homeless people had taken possession of it.

At the end of 1993, a working group was established to preserve the building. On December 4, 1995, it was declared a national monument.

Only in the year 1999, when the Glass Palace received recognition, the municipality became interested. They bought the Glass Palace from a danish investor, to whom it meanwhile had been sold.
Jo Coenen and Wiel Arets got the job, to make the Peutz-building useful, if possible in its original form.

In 1997 it was put on the Heerlen monument list and in 1999 it was included in the architectural Top 1000 of the 20th century. And this, even though it had been rescued yet in 1994 from the wrecking ball.
For 30 million € the Glass Palace has been remodeled and it was touted by the municipality as a “window to the culture.”
In the building are accommodated the public library, the school of music, a movie house, the architecture center Vitruvianum, a Grand Café and a restaurant in the former penthouse and “Roof Garden”.
The downward spiral of 60-90 years had been turned, and we are now seeing an significant building which has been nominated as a UNESCO World Cultural Heritage Site.

It is particularly regrettable that in the apartment on the 5th and 6th floor, where we are now, the cinema has been built, and that the monumental hall, the private elevator and the restrooms have been sacrificed for it. None of the rooms is still there. Only the machine room for the lift has been preserved. Fortunately in the restaurant also the bay and the spiral staircase are preserved.

Since 2009, the name Schunck is on the building again. It now offers shelter to SCHUNCK∗ and is a living institution with a lot of culture, exhibitions and a nice restaurant with a beautiful view of Heerlen.

I thank you for your attention. 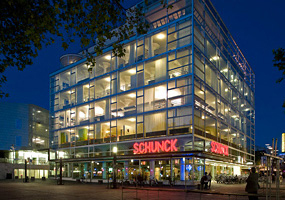 Addendum : In 1995, the Glass Palace was declared a national monument. The Union of International Architects even put it on the world list of the top monuments of the last century. This honor was granted only to twelve other Dutch buildings, including the Beurs (Stock Exchange) by Berlage and the Van Nelle factory.
On 30 June 2004 the grand opening of the renewed Glass Palace took place. Whoever passes through the swinging doors into the monumental entrance hall of glass, iron and teak nowadays, certainly does not feel to be transfered to the thirties. The prewar building just looks modern, no more and no less. Because it is timeless.

Gorgeous images of the glass palace by photographer Ernst van Loon from Maastricht.50

Film at Mashpedia on the history of Schunck, from the beginning when Arnold Schunck came from Kettenis to Heerlen, via the Glass Palace, to the transformation to the today’s Palace of Culture. All this in connection with the emergence, flowering and decline of the coal mining in the region. Made by means of many photos, commissioned by SCHUNCK∗. Some knowledge of Dutch would be helpful.37

Architect of the Glass Palace.8

The Glass Palace on architectuur.org

The Glass Palace in sources

A new life for the Glass Palace

The restoration of a pearl of modern architecture in the Netherlands, the former department store Schunck, better known as the Glass Palace in Heerlen.4