Arnold Schunck,
a weaver who maintained

Arnold Schunck, the founder of the company A.Schunck in Heerlen, was born on 11 February 1842 in Kettenis near Eupen (nowadays Belgium). The combination Schunck and textiles are already of old date, because a study of the former municipal archivist shows that already in 1776 a "Tuchmacher Schunck" lived in Kettenis 1).
His son, Nikolaus Severin Schunck (1799-1865), entered in the footsteps of his father and also had to pay the toll for it. For he eventually died of black lung, a dreaded weaver’s disease.
Nikolaus Severin Schunck had five sons: Nikolaus, Wilhelm, Arnold, Severin-Joseph and Ludwig. Father Nikolaus hoped all of them would work in his shop, weaving handmade fabrics. The reality was different: Nikolaus, the eldest son, went in Aachen to the weaving mill Delius and thus he said goodbye to the craft to become proficient in the mechanized weaving. Wilhelm went to Russia, Arnold (the founder of the company in Heerlen and founding father of the Dutch Schuncks) dreamed of emigration to New Orleans, Ludwig did not know what he wanted but considered going along with Arnold to the States. Only Severin Joseph remained with his father working at the handloom.
The discussions at home between father and son Nikolaus on the advantages and disadvantages of mechanized weaving, made Arnold decide to find out himself which method had the best future prospects 2) during his journeyman years. After the death of his mother (1858) the dispute broke out. The balance that was made of the shop, was devastating for father’s views.

Nikolaus, the eldest son, went therefore to the factory in Aachen, while Arnold was confirmed by these results in his intention to leave.
He went to Eupen, where he successfully completed the training for Master Weaver in the company of J.P. Fremerey. On April 17th 1860 he started from that place his „Wanderschaft“ (journeyman years), which would last until 5 November of that year. On his journey (mostly on foot), he stayed a.o. in Silesia (center of mechanical weaving), Mannheim, Munich, Nuremberg, Berlin and Hamburg, but the result was just miserable. All those months he exercised only a few weeks his profession as a hand weaver and a factory he could admire only from the outside. The manufacturers had nothing to do with these Wanderburschen. Perhaps this negative attitude of the manufacturers caused his dislike for everything called factory. The fact is that until his death he refused to do even one shot yarn through an iron machine and that he remained loyal to his wooden hand loom.

Upon his return to Kettenis Arnold takes place again at a loom in his father’s workshop. In 1863 the three brothers, Nikolaus, Wilhelm and Arnold went to Russia, first just Nikolaus and Wilhelm; later they were followed by Arnold and the wife of Nikolaus with the furniture. On the advice of Delius a Russian financier had asked Wilhelm to come to Russia, because they needed an expert textile mechanic who was capable to set up a spinning and weaving mill. Wilhelm wanted to go, but he preferred not to go alone. Arnold went to Russia only as a fellow traveller of Nikolaus’s wife and one year later he returned back to Kettenis.

Nikolaus sr. died in 1865. Severin-Joseph wanted to continue the shop, but both he and his siblings knew that this was only possible if he mechanized and employed steam power. Severin-Joseph had saved up for this goal. The other heirs did not want to deprive him of this money but this made the distribution of the estate rather difficult. There were indeed fixed assets, a house and a workshop with outdated equipment, but no cash.
When Wilhelm came in 1868 from Russia to marry, they found the following solution: the brother Severin-Joseph would be the owner of the house and the weaving shop in Kettenis. after five years He would pay 1000 Rhenish thaler to each other heir. He would give to each of his brothers one hand loom immediately and after these five years a compensation in kind, ie fabrics woven by him. This distinction between the brothers and the other heirs came because the men had worked for years without any remuneration other than room and board.
Nikolaus sr. had a hard time, but for his son Severin Joseph things went better. Caused by the unification of Germany in 1870 there was a great revival in industrial activity 3). The weaving industry found new markets. Severin-Joseph has fully benefited, so that after five years he could meet his obligations towards his brothers. 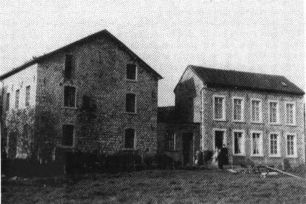 In 1866 Arnold moved with his brother Ludwig to Hauset, where they tried to earn their cost of living in an abandoned mill (which was called „Kupfermühle“) on the Geul. They had no means to buy yarn and to finance orders. So they started dyeing and finishing industrial yarn and fabric4).

During his „Wanderschaft“ Arnold became friends with one Joseph Kops, who emigrated later to New Orleans in the US. Between the two man there was a correspondence 5) and Arnold considered to follow his friend to America. Joseph Kops sparked that desire by jubilant reports on all the possibilities for an immigrant in the USA.

But that dream faded when Arnold became acquainted with Anna Küppers, whom he married on January 25, 1873. In that year, the funds and materials from the estate of Nikolaus sr. came at their disposal. Anna was concerned that the money quickly would be used up if she would let the two brothers do what they liked, especially as the situation in the textile market had changed again. Especially the high productivity of Eupen and Aachen did the textile industry of Verviers (where the majority of their customers sat) no good. So the textile industry of Verviers was left with unsold inventory, which after 1873 was thrown in the market at predatory prices. And so Arnold and Ludwig were sitting on their inherited cloth.
When at October 31, 1873 their son Peter is born, the situation is critical. Arnold visits a distant relative in Vaals, the pharmacist Knittel, to get some medicine. He tells him that he gets his herbs from a priest in Heerlen, who has founded an orphanage for boys, where they learn a profession. He encourages Arnold to contact this priest (Mgr. Savelsbergh). Perhaps he can teach the boys the art of weaving. Anna, who since her childhood used to work in her father’s market garden, would certainly know how to handle medicinal herbs and how to pack up and sell them. The plan is not received with enthousiasm. Anna finds the idea worth considering. She could imagine herself selling herbs.
Meanwhile something had to happen. The stock material had to be sold. They decided to cut samples which had to be shown to merchants. And the St. Joseph Market in Sittard (March 19) was the obvious opportunity. Anna knew the mercantile talent of her young husband, which was inversely related to his expertise. And so Ludwig was appointed to accompany him as his helper.
So March 19, 1874 they were in Sittard. They spoke to almost every merchant but sold nothing. They could not compete with the predatory pricing of the manufacturers from the Belgian Vesdre (Verviers and surroundings, mentioned above). On the advice of Anna they went back home via Heerlen, where they had a conversation with Rector Savelsbergh about his plans. The rector wanted to consider the matter a while and promised to answer within a few weeks.
That response took more time than expected and since the situation became increasingly critical, Arnold considered the idea to leave to his brothers in Russia. Anna and Ludwig didn’t think much of doing so. What they heard from Wilhelm was not really enticing: hard work to train totally incompetent and stubborn personnel to weavers.
Anna felt more like carrying out Arnold’s original idea of emigrating to America. Indeed, so valuable professionals like Arnold and Ludwig were scarce there, as the letters of Joseph Kops proved. On May 3, 1874 Arnold Schunck made enquiries about the crossing from Antwerp to New Orleans. The firm Dixon replied on 5 May that the cost for a steerage passage (the cheapest way) for an adult would be 160 Belgian francs and 15 francs for an infant. The crossing would take 12 to 14 days.

Finally - after all hope of a life in Heerlen was given up - a message arrived from Rector Savelsbergh. They came to an agreement and the move to the Willem Straat (also called The Schram) in Heerlen was determined on August 1874. The residents’ registration office of Heerlen is able to report that on August 25, 1874 Arnold settled with his wife Anna and son Peter in Heerlen, in district A No. 112. Three disassembled looms, furniture and rolls of cloth were transported on carts from Hauset to Heerlen.
The original Schunck store was nothing more than a large room, where on the one hand were the racks with rolls of cloth and on the other hand was the herbs department. Arnold was engaged in the training of two orphan boys to weaver, while Anna ran the shop. The store was so successful that Arnold’s weaving room was no longer able to deliver. So they were even forced to buy cloth at weaving mills in Aachen and Mönchen-Gladbach.
With regard to Arnold’s weaving activity they bought of the saved money a small farm with a pasture in Schandelen, located on the brook. Here Arnold could prepare his warps, proof the woven cloth and dress it on frames to dry. 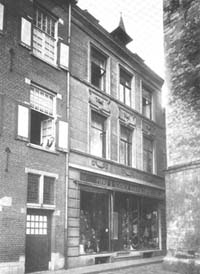 Fa. Schunck since 1882, next to the Pacratius church

In 1882, they moved from the Schram to the Kerkplein (Church Square) where they could buy an old house. This place was much better because now they had the sunday market directly in front of the door. This was what attracted the farmers from the surroundings. Business was so good that in 1894 the building was demolished and a new and larger one was rebuilt in its place. The new store covered an area from the Square to the city wall along the Vlot. An innovation was the application of concrete and there were large windows with mirrored windows.
Schunck’s success in Heerlen is attributable to several factors: first, the relationship between the spouses is important. Arnold, the craftsman, was not a salesman. This defect was more than compensated by his wife Anna. Then one must realize that the children, once they left school, helped actively in the store. And finally, the growth of Heerlen by coal exploitation also helped. At the turn of the century, they already had to bring in sales personnel from outside the family. As was usual at that time, the staff lived in the family’s house.
Yet before Arnolds death (1905) the sole proprietorship was changed into a partnership: Arnold himself dedicated the last years of his life to the design of new fabrics. Thus he preserved the bond to his trade, even though the company Schunck itself was no more active in that field. The last two journeymen had switched from weaver to roofer and the left space of the weaving room was occupied by tailors who manufactured clothes for men from the purchased fabrics, not only in size but also in ready-made clothing - something new for Heerlen.
The success of the firm is also deduceable from the various buildings that were involved in the course of time. As already said they started in the current Willemstraat. In 1882 Anna and Arnold Schunck moved to the Kerkplein (Church Square), where they bought an old house. In 1894 a new building was erected behind it, and the old store of 1882 was demolished and replaced by a new one. In the course of time they managed to buy all properties west of the church to the „Vlot“, so in 1933 the glass palace could be built there.