On this website, more about Jan Willem (Giel) Berix
Jan Willem Berix (nl.wikipedia)
Source of the text below: https://www.4en5mei.nl/oorlogsmonumenten/zoeken/1340/meers-monument-voor-kapelaan-j-w-berix

After his priestly studies in Roermond and Rolduc Jan Willem Berix was vicar in the St.Pancratius parish in Heerlen. In World War II he joined the resistance. His resistance name was Giel. He became district leader of the L.O. (National Organization for assistance to hiding people).
More information on the resistance work of Giel Berix.

In March 1944, seven leaders of the L.O. were arrested by treachery in Weert. See The Raid of Weert.
Berix was one of them. With his fellow resistance fighters Jan Hendrikx (Venlo), Jac Naus (Venlo), Guus Hermans (Weert), Jacques Knops (Gulpen), Sef Mulders (Maastricht) and W.H.M. Jansen (Vierlingsbeek) he was transported to the concentration camp of Vught, where he was subjected to heavy interrogation by Schut, a member of the SD. Schut tortured him so horribly that his boss Nitsch (himself notorious in that respect) admonished him. But the vicar kept his mouth closed. His inmates were seriously concerned about the vicar, because of his already weak health. Berix kept short sermons in his cell from a chair that was first put on a table, by the air duct through the building serving as a sound box. He did so every day, no matter how bad he might be after an interrogation.

On September 6, 1944, vicar Berix and eighty to one hundred other prisoners were pushed into a cattle waggon with destination Sachsenhausen near Oranienburg near Berlin. There he was employed in the Heinkel aircraft factory. With his companions, he prayed for a return back home soon. Like many others Berix became infected with dysentery. He was taken to the infirmary and restored initially. But he returned to the camp as a broken man. In mid-October 1944, he was separated from the others and transported to Bergen-Belsen (http://en.wikipedia.org/wiki/Bergen-Belsen_concentration_camp). Berix landed in barracks that were dirty and neglected and were full of vermin. After a few days vicar Berix died (believed to be) on March 13, 1945. 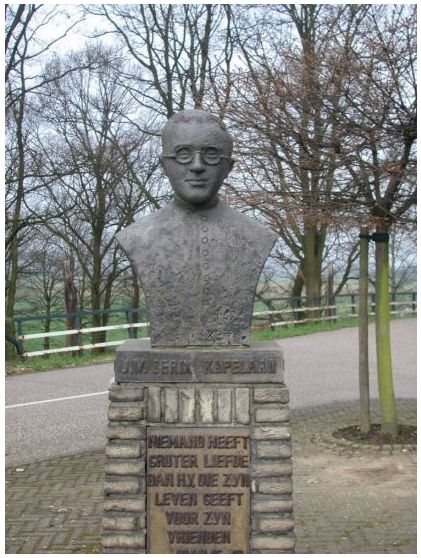 The monument in Meers (municipality Stein) was constructed in memory of the vicar J.W. Berix who was active in the resistance. It also commemorates thirteen residents of the town Stein who were killed by acts of war during the years of occupation.<>

The text on the pedestal reads:

NOBODY HAS
GREATER LOVE
THEN HE WHO GIVES
HIS LIFE
FOR HIS
FRIENDS
JOAN.15-13

Restoration
The plaque was renewed in 1967.

Construction
The construction was initiated by former resistance fighters. The bust is financed by the municipality of Stein. The land on which the monument is made available by Rijkswaterstaat.

Unveiling
The monument was unveiled on September 2, 1956 by Mayor Corten.