The fallen resistance fighters in the dutch province of Limburg

The fallen resistance fighters in the dutch province of Limburg 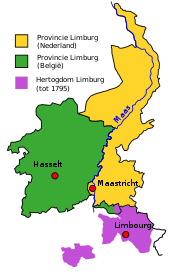 A little geography and regional history, for a better understanding: For hundreds of years, there have been many linguistic, economic and political links between the "three Limburgs" represented on the map to the right (Source: Wikimedia, click on the map). The former Duchy of Limburg no longer exists since the time of Napoleon and is now part of the Belgian province of Liege. The majority of the population speaks French today, but during the war, Limburgish was still the main language spoken in the north. It is a regional Germanic language.
After the defeat of Napoleon, the other two territories, which are the Limburgs of today, became one province in the new Kingdom of the Netherlands (which was identical with today’s BeNeLux). The new province was named after the former duchy. When Belgium seceded in 1830, the province of Limburg was divided: Belgian Limburg and Dutch Limburg, which plays the main role on this site.
Refugees had to be forwarded from the Netherlands to Belgium. This also happened from the southern edge of South Limburg, among others in the direction of the Voer municipalities and the region of Herve. There, too, people of the resistance died. Some of them were in direct contact with the Limburg resistance and are therefore also listed here.
Jules Goffin and Karel Jacobs (Father Hugo) were part of the Belgian intelligence network Clarence, Piet Muhren (Father Étienne) of the Erkens group. This made no difference to the two monks of Valdieu Abbey. They worked closely together, despite Clarence’s strict rule of cloisoning, of division into boxes: only one group per person and only one activity. Perhaps this contributed to their becoming victims, like the Erkens group, of the Hannibal game?
Read more about Belgium during the Second World War in ⦁ Nederlands ⦁ Français ⦁ Deutsch ⦁
Wikipedia ⦁ NL Clarence ⦁ DE Clarence ⦁ FR Clarence ⦁
Wikipedia ⦁ NL ontsnappingsroute Comète ⦁ DE Fluchtnetzwerk Comète ⦁ FR Réseau Comète ⦁

Lived in Leopoldsburg. Son of administrator Gerardus Johannes De Backer (born in Kortgene) and Victoire Adrienne Hélène Royen (born in Maastricht). Married. Day labourer. Roman Catholic. He was detained as a political prisoner. Debacker, as the Belgians write, is one of the 22 victims, who were shot on 6 September 1944 around 6:30 in the evening by some SS men of the retreating division Langemarck. At the approach of the Allied troops, 900 prisoners had been released that day. Residents of Leopoldsburg provided shelter for Debacker and a number of other former prisoners and gave them a good meal. During this ‘freedom feast’ SS men stormed in, herded the participants together and made them walk towards a canal. There they were shot. The part of the creek, where the drama took place, has since been called the Treurgracht(Mourning Trench) and the part of the IJzerlei, where the memorial with, among others, Debacker’s name is located, has been changed into the Martelarenstraat. The SS men involved were sentenced to death or life-long forced labor. About the killing of the 22 victims the book „6 september 1944 - De Fusillade te Leopoldsburg“ (6 September 1944 - The Fusillade at Leopoldsburg) by Marius Louche has been published [3].

Some documents about him can be seen at www.nationaalarchief.nl/. [4]

Paul Fernand Cécile Ghislain Marie Schoenmaeckers from Amby (today a quarter of Maastricht) married Hélène Palmers on June 12, 1911 in Stevoort near Hasselt. From then on they lived in Rekem (Belgian Limburg). During the occupation, they joined the Comet escape line, together with their sons, Michel and Jean and his wife Marguerite De Bissy. They worked there for Line (pronounce: Leene). That was the pseudonym of Olympe Félicie Henriette DOBY. Paul and his wife Helene were also hiding a Jewish girl in their home. Most of the refugees this group helped on (mostly to Brussels) were downed allied airmen, “supplied” mainly from the Maastricht region, especially by Paul’s sisters Hélène and Adèle, who were still living in their parents’ house in Amby. Paul and his youngest son Michel were arrested on November 26, 1943; Jean just managed to escape. Paul died in a transport near Obrnice (German: Obernitz), now the Czech Republic.
Michel was born on December 8, 1919 in Rekem (B). He took particular care of people hiding in the forests around the villages of Lanaken and Rekem. Was murdered on September 15, 1944 in the concentration camp Nacht und Nebel-Lager KZ Sonnenburg at the age of 24. The goal of these special camps was to make the resistance fighters disappear administratively, nothing was written down about the prisoners and their families were not informed.
Schoenmaeckers Cross for Paul and Michel in the forest near Rekem: N 50° 55.259 E 005° 39.935
Stolperstein for Paul and his sister in front of their parents’ house, Bergerstraat 2-4 in Amby.


This person is not (yet?) listed on the walls of the chapel.

Vliexs,
Marie Hubertina Theodora
Pia∗ 1920-05-18
Maastricht
† 1944-09-11
Opglabbeek (B) ♀ - This person is not (yet?) listed on the walls of the chapel. - Amby - Belgium - Secret Army (B) - The daily newspaper Het Belang van Limburg wrote on September 18, 2017 [1] under the title "The 9/11 of Opglabbeek": "Shot after an attack by resistance fighters on retiring Germans. In addition to Nicolaas Esser, Antonius Alenus, Renier Coolen, Henri and Josef Dirckx, Jaak Hellings, Pierre Paspont, Pieter Slootmaekers, Jacq Vanaanhoud, sisters Leonie and Maria Vliexs and Maria Hubertinia Voorpijl were also shot without any form of trial." In reality, it was not an attack, but a very unfortunate confluence of circumstances and probably treason that led to the Maaseik section of the Secret Army ceasing to exist shortly before the liberation. Read more about this in the introduction about the Secret Army.
The Vliexs sisters also belonged to this section. Their father was from Hulsberg, their mother from Meerssen. They married in Amby and moved from there first to Maastricht and later to Maaseik in Belgian Limburg.
In the middle of 1942, the dean of Maaseik knocked on the door of the Vliex family. He asked if they could help four escaped French prisoners of war. The four stayed in their house for a few days and then moved to an old barn nearby for an unknown reason. In the evenings, the sisters brought food and drink to the barn. Thus, the three older sisters, including Pia and Bertha, joined the secret army in 1941. Alphonsine (Sieske) Vliexs (∗ Amby, November 2, 1925 - † Maaseik, March 11, 2016) also wanted to join. At the time she was deemed too young, but later she too joined in. [3.1][4]

After the disaster of September 10 and 11, 1944, nine people were murdered in the vicinity of Maaseik, others between Heer and Cadier en Keer, a third group even further east, on the German-Dutch border, while the cannons of the approaching Allies could already be heard. All were accused of being members of the secret army. [1][2]
The youngest sister, Sieske Vliexs, survived the German camps disabled. Sieske and Helène Vanlaer were among others in the camps Ratingen and Ravensbrück, where they had to do slave labor.[3.1.]


This person is not (yet?) listed on the walls of the chapel.

Wolfs,
Jean Martin August
Jean∗ 1923-06-20
Maaseik
† 1944-09-12
Heer This person is not (yet?) listed on the walls of the chapel. - Heer - Belgium - Secret Army (B) - The baker Jean Wolfs lived in Maaseik. Son of the miner Jules Leopold Henri Wolfs and Maria Hubertina Kelders. [2] His parents both had the same last name as Jules Wolfs’ parents, probably they were cousins. His name is on the Belgian monument in the garden of Huize Sint Joseph on the Pater Kusterweg, which today belongs to Cadier en Keer (municipality of Margraten) [1][4].


This person is not (yet?) listed on the walls of the chapel.-

Wolfs,
Jules Leopold August
Jules∗ 1923-04-29
Maaseik
† 1944-09-12
Heer This person is not (yet?) listed on the walls of the chapel. - Heer - Belgium - Secret Army (B) - Jules Wolfs lived in Maaseik. Son of the workman Jean Herman François Wolfs and Juliana Gerardina Kelders. [2] His parents both had the same last name as Jean Wolfs’ parents, probably they were cousins. He was unmarried and a workman. His name is on the Belgian monument in the garden of Huize Sint Joseph on the Pater Kusterweg, which today belongs to Cadier en Keer (municipality of Margraten) [1][4].


This person is not (yet?) listed on the walls of the chapel.-